Originally I was going to write something quite different from this, but after being back in Melbourne for a few days I’ve decided to change tact and include what happened on my immediate return.

Coming back to Melbourne nearly a year premature is a decision that has an entire story accompanying it.

As many of you will know I left Australia in June 2014 without a return ticket home. Initially I had the idea to stay away for at least 12-18 months…but this was always a flexible estimate. I went backpacking for two months from China, through Mongolia up to Siberia’s Lake Baikal, along the Trans Siberian Railway to Moscow and St.Petersburg. I hopped through the Baltics; Estonia, Latvia and Lithuania to Warsaw, Poland before jumping on a flight to Athens for a brief 14 hour stop on my way to go sailing in Turkey. From Ballooning in Cappadocia I reached the only capital in the world to exist on two continents Istanbul. I then flew home to Bergamo Italy for a week to see family and friends after 4 long years before moving to the Netherlands. I lived in the Netherlands for 5.5 months where to many of your astonishment I never touched their infamous green plant! I completed second/first/fall semester (depending on which part of the world you come from) at Leiden University about half an hour from Amsterdam, in the picture perfect university city that is predominately home to students and rich seniors. I lived my days parking my bicycle and going to the local market when I wasn’t off on a day trip exploring some other part of the Netherlands, or on an international adventure. Whilst living in Leiden I travelled internationally to Antwerp, Belgium >  London, England > Oktoberfest in Munich, Germany > Berlin, Germany > Budapest, Hungary > Bruges, Ghent & Brussels, Belgium > Luxembourg > Trier & Cologne, Germany > Rome, Florence & Milan, Italy > Paris, France > Essen, Germany …

This is where the story gets a little blurry.

The original plan was one semester at Leiden, The Netherlands, then six months working as an Aupair (live in nanny) also in the Netherlands. This was to be followed by by a winter/summer semester unit at Prato, Italy in June before going to Bergen University in Norway for the second semester of 2015 before returning home before my 21st birthday in January 2016 = 18 months.

Now I know I’m an Arts student and don’t do maths but even I know arriving unannounced on my parents door step at the end of February 2015 was no where in that plan!

I changed my mind. I gained perspective. I realised what was important and where I wanted to be. I realised how young I am. I realised how amazing Melbourne is. I realised that Europe will still be here in the years to come and I didn’t have to do this now. I decided that being in Melbourne right now was the right decision for me and I wanted to go home. So in October 2014 I made a decision, after a painful internal struggle and a nudge from a friend that I will forever appreciate, to go home once my semester at Leiden finished and before the commencement of Monash’s Semester 1 of 2015.

I didn’t tell my parents, or my friends I was coming home…I simply neglected to mention it for a while…and then I decided that it would be better if I just turned up. I told 3 people from Melbourne and a hand full from Leiden. Those three were my best friend Anna who I was going to go and visit on the way home in Hong Kong where she is now on exchange, one of my closest friends who picked me up from the airport, helped me surprise our friends and put up with me sending boxes of luggage to his house when I obviously couldn’t send them home, and finally my boss as I was going to return home flat broke and in need of a job! 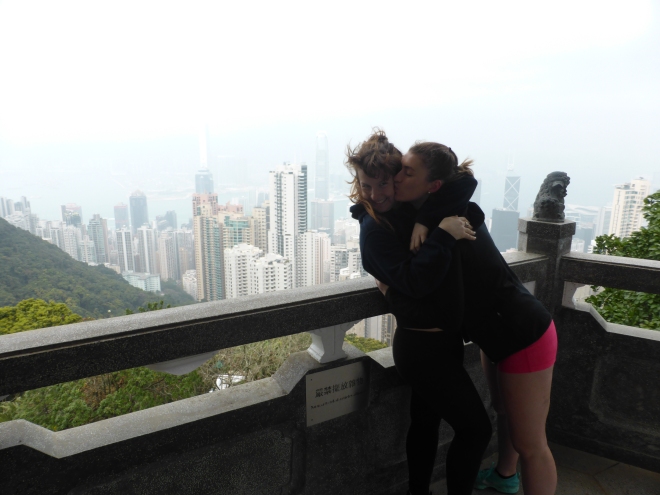 I arrived 23 hours delayed and missed a pool party which I was planning on gate crashing as the perfect opportunity to surprise all my friends. Instead I went and woke them up in their hung over sleepy state resulting in dazed realisations and yells, voices followed by a stumble down the corridor and an equally surprised scream and hug, overly long realisations and enormous hugs and group hugs and cuddles in bed. I turned up on my doorstep and my sister screamed and screamed! My mum couldn’t believe her eyes and there were lots of tears and hugs. My dad got such a shock! Family friends were fed the story I told my parents to recount until I gatecrashed dinner plans to say hello. My Nonna, Zia, Zio and cousin were all so so shocked but distracted by cooking crostoli – which was probably a good thing as I had hoped not to give my Nonna a heart attack.

Being back in Melbourne for the past few days has been amazing. I am so happy to be home and I am absolutely certain that this is the right place for me to be right now. I am happy! So happy! Everything is brighter and shinier and more beautiful than I remember, perhaps that is because it’s summer as a few people have pointed out but I strongly believe its my eyes and inner recognition and appreciation of Melbourne, of home.

I’m sorry to anyone I have had to lie to over the past few months, and I am incredibly shocked that this entire thing didn’t unravel from beneath the enormous act I had to put on. I cannot thank the people who helped me enough! You know who you all are. Those who listened to me as I went through each progressive emotional stage. Those who encouraged me whether it was by saying how crazy and insane I was for attempting it or marvelling at the depth at which I had thought it all out. Those who I burdened with the knowledge of my secret and asked them too to keep it quiet. Mostly though I must thank those who it effected directly, Anna and Steve I could not have pulled this off without both of your help. Thank you for keeping track of me and checking in to ensure I didn’t completely fall off the grid when I embarked on travels in secret. Thank you for meeting me at the airports to make sure I didn’t have to endure lonely arrivals gates yet again. Above all thank you for always being there even when you were thousands of miles away, especially when I turned into an insanely anxious mess towards the end. It’s all over finally, I’m home!