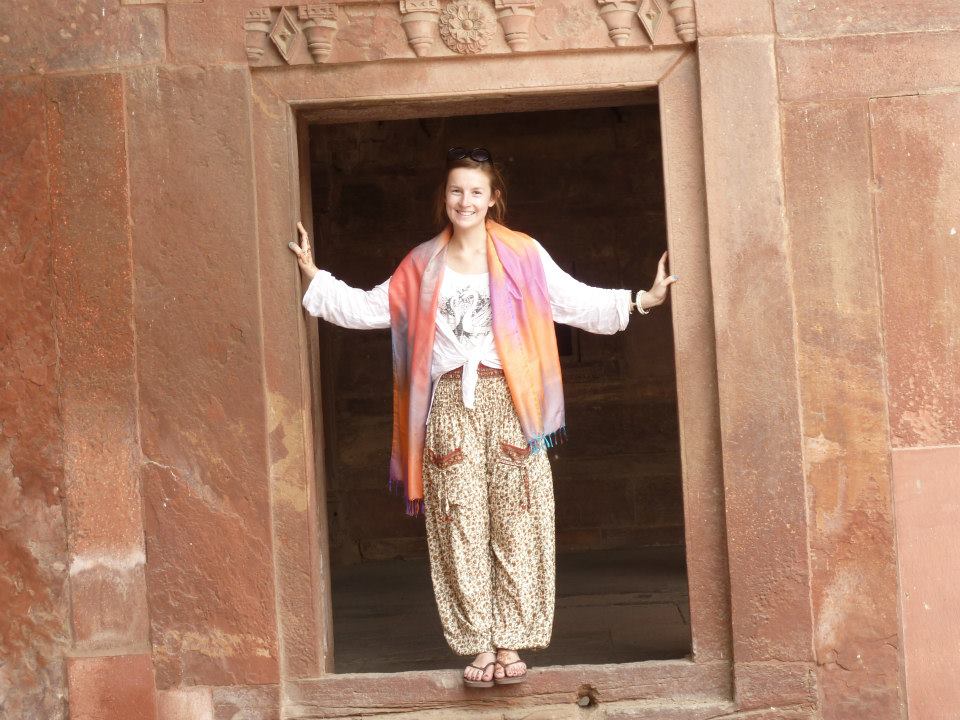 Before I went to India I didn’t eat spicy food!

There are a million things I could say about India.

My dad didn’t want to come so I went with my mum and sister. We were treated like celebrities and people wordlessly passed my sister and I their children to take photos with. They took the opportunity when mum was taking a photo of us to also start taking photos of us, then coming over to ask if they could have a photo with us. The next thing we knew we had a que lining up to have photos taken with us that we had to hurriedly run away from! I dread to think how many people have photos of us. I fell in love with Bollywood after seeing my first film Yeh Deewani Hai Jawani in first FIRST class seats front and centre of the balcony worth just $6! I still play the soundtrack on repeat (currently listening to it now). I learned that Indians eat dinner at a ridiculous hour…10:30 is perfectly normal. Which to me who has eaten at around 5-6pm for years was just absurd! I jumped on a moving train. Our tour guide got arrested. I learned to tolerate and even appreciate spicy food. I learned the proper way to dress for hot weather – and no Australia it is not wearing as few clothes as possible, revealing as much skin as we can until it becomes socially inappropriate! Instead opt for loose fitting, flowing clothing that breathes!! It’s a gem really you should try it…Although from what I have heard the Australian summer currently doesn’t require it ‘Sorry guys! Summer really hasn’t been kind to you down there’.

I was recently talking to a friend who just went to India and between us it amazed me how similarly we felt about the place.

It is incredible and has a vibrance, culture and history about it that is bewildering. I fell in love with the Persian tales as I wandered around Ambra Palace imagining it at the height of its glory. With jewel encrusted walls and Persian carpets covering the stone and marble flooring, while lavish drapes hung from the walls constantly wet to air-condition the palace. Whilst in the summer garden swing chairs and hammocks hung from the ceiling for the wives to enjoy outside their 300 apartments…yes you read that correctly the palace contains 300 apartments for ALL 300 of the king’s wives!

I didn’t really know what to expect and I didn’t think too much about it before I went. Mum booked and bought the tickets and next thing I knew I was leaving Australia on a whirlwind month tour through India and Nepal! I had a ball! Colours, smells, noises; music and car horns mixed in with religious chanting. There was such a festive attitude and some of the people we encountered along the way were delightful and enchanting. But I’m not going to lie. I’m not going to tell you all the bright and colourful fun aspects and leave out the fact that during this trip I experienced the most uncomfortable feeling I have ever encountered in my life. For the first time ever, and I hope but truly doubt for the last, I felt truly uncomfortable in my own skin, like I wanted to be anywhere but where I was at that given moment. I spent a sleepless night trying to keep myself together as my skin felt like it was literally crawling with my discomfort! I had to bow my head as I witnessed a scene at the train station that I can only describe as resembling a scene from the Titanic as people tried to flee..but in reverse as people swarmed towards the doors in their haste to board the train.

I’m sorry for the rather long introduction but two weeks of adventures through India cannot simply be described in one blog post. To do it justice I am going to write a post on each of the stops we took along the tour so that I can tell the entire story.